Inside the Ryder Cup | Stories from a Former Captain

Paul McGinley has been a member of Team TaylorMade since '89. He goes way back with the brand, as he was playing college golf in San Diego when he first met TaylorMade founder Gary Adams.

The sharp-witted Irishman is one of the game's best storytellers and has been a staple in the European team room for nearly every Ryder Cup for that last two decades. Over that time, he's been a player, a vice captain, and in 2014 it culminated with a captaincy. For his Ryder Cup career, he was part of three winning teams as a player and captained his team to the cup at Gleneagles.

We sat down with McGinley ahead of this week's Ryder Cup with a notebook and voice recorder. While we can't share all the stories, the ones we have compiled are absolute gems. Let's go inside the Ryder Cup with this former captain.

You've had some big Ryder Cup moments, from sinking the winning putt as a rookie in 2002 to captaining in 2014. But let's go back to 2004 and your showdown with another Team TaylorMade athlete, Tiger Woods. Walk us through what happened there.

It was Saturday of Ryder Cup and the day before Padraig was paired with Monte when they had the win over the infamous pairing of Tiger and Phil. Padraig played quite well.

But the next morning, he was in the fourball and having a tough go at it.

So, he tells Langer not to play him in the afternoon – it's too late, pairings are locked. Then the draw comes out: Me and Paddy vs. Tiger and Davis Love. Here I am, playing some of the best golf of my life and giddy to play against Tiger Woods for the first time. But Padraig was on a downer, which is unusual for him. We had lunch, and I'm trying to talk him up, but he's just not having it.

So, anyways, we get to the first tee and its foursomes. Padraig is teeing off first, and you can always tell when he's uncomfortable. He's fidgeting around, gripping and regripping. Finally steps up and hits the biggest snipe of a duck hook you've ever seen. Straight left, well into the trees.

Then Tiger steps in and just smashes it down to fairway 300 yards. 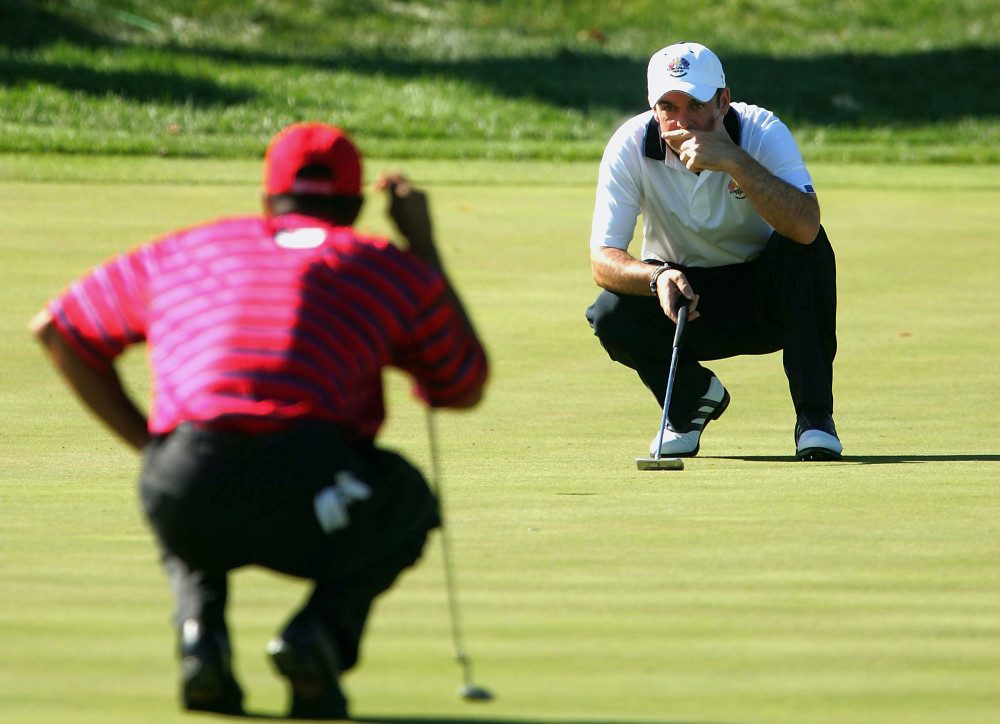 McGinley squared off against Tiger at the 2004 Ryder Cup. ©GettyImages

Okay, so we're off. The American crowd is singing and shouting: "Tiger, Tiger!" We get down there, and there's an OB fence on the left-hand side and we're right up against it. There are about 10 trees I've got to go through to get back in the fairway, and I got a restricted backswing with the fence.

Long story short, I hit the fence and my downswing, nearly shanked the ball and it hits the tree in front of me. Padraig hits his shot, ricochets off a tree back against the fence. I go back in again, hack it out. He hits it back off the tree.

We've played about five shots. We look out in the fairway, and there's Tiger and Davis standing with their hands on their hips. They haven't even hit their second shot. They're waiting for these two paddies in the trees, hacking it around. We said, okay, let's pick it up.

On to the second hole, a dogleg left par 5. Davis hits another smash down the middle, and I'm in the fairway but 20 yards behind him. Padraig lays me up to a nice yardage of about 80.

Tiger then hits a 3-iron second shot that just comes out like a rocket. Dead straight, frozen rope all over the flag. Wow, just the noise of it. Keep in mind that I'd never played with Tiger before. I was like, "Holy ****, this is something different."

The ball lands on the green, and the American fans are going nuts. I thought he holed it. We run up there to have a look: It's eight inches from the cup. Two down after two, and at this point we're both thinking 9&8 – maybe 7&6 at best. Just embarrassing.

So, I said to Paddy, let's change the dynamic here. Let's give ourselves double on the first and par on the second. So we're 2-over. Let's just get back to even. I could see that connected with him, and from that point on we started playing the course and forgot who we were playing against.

A few birdies go in, they make a mistake, and before we know it we've gone 1-up and so how beaten Tiger and Davis. Every Irishman from New York to Boston was chanting us on around that final green. And that's my Tiger Ryder Cup story.

Chills. Truly awesome story. Let's go back to your first Ryder Cup, describe the run up to 2002.

I won the 2001 Welsh Open, and that made me a lock on the Ryder Cup team. I was in form – top ten, top five, top three, second places every week. I made the team quite comfortably.

Then 9/11 happened, and the whole thing was rightfully canceled. So, I came back 12 months later, and I'd gone from sixth on the money list down to 42nd. I'm missing more cuts than I'm making – all off form.

That's what's difficult about the Ryder Cup. Normally, when you see guys playing under pressure, they're coming down the stretch in a major, and they're in that position because they played well the first two or three days. Whereas in the Ryder Cup, you could be in because you played well six months previously. That's a tough place to be as a golfer and that's where I was at.

What role did your captain play in getting you through that week?

There's a bit of a debate sometimes. How important is a Captain in the Ryder Cup? The players hit all the shots. For me, in my experience, the captain is massively important.

I say that because of 2002. I would never have mentally been near a place to play a pivotal role on the team that week. And it wasn't just holing the winning putt. It was the day before when I played with Darren, and we were one down with three to play, and I birdied 16. Then I hit a 4-iron into 20 feet at 18 to make par and win the match for us. That set us up for the singles as a team.

So, I played a hugely pivotal role for a guy coming in with no confidence.

That was all because of Sam (Torrance). Sam played me like a fiddle behind the scenes. He was dragging me along, respected what I had to say, and made me feel like such an important part of the team – even though I didn't really believe I was at the start of the week. He put me in a place, and in a mindset more importantly, so when I got in that pressurized situation, I reveled in it. I believed in myself.

Did you take inspiration from anywhere else?

The stories behind the stories are always so important in a Ryder Cup. I remember something from Jesper Parnevik, in particular. Everybody thinks Jesper's nuts and eats the volcano rock and that kind of thing, but he's a sharp guy. He doesn't talk a whole lot, but when he does speak up, it's normally quite impactful.

I remember the team meeting that Saturday night; this was before team rooms, so it was basically just Sam's hotel. After winning my match with Darren, I was on top of the world, and Sam had just given his Braveheart speech. Then he asked if anyone had anything to say, and Jesper stood up.

He said to the four rookies, particularly those playing down in the order for singles matches, it would be important to know that tomorrow would be a different dynamic. Over the first two days, there are only four matches on the course at any one time. It's very intense, with 50,000–60,000 people following four games. The whole atmosphere changes tomorrow, he said. The vibe shifts with 12 matches strung out over the course. So for those players down at the bottom, it's going to be really quiet when you reach the third green; you're going to think you're a sideshow to the competition. But remember, the crowds will filter back, and there will come the point when your match is critical. He was exactly right; I watched it in front of my eyes. So when it did happen, I was able to refocus and off I went.

I made the winning putt for my team as a rookie, and I'll never forget that advice.

Did you take any of what you learned and apply those strategies when you were a captain?

My guys knew 10 days before the Ryder Cup who they were playing with and how many matches. I got that from Sam, and it really helped me prepare and get my mindset ready for the week. It wasn't set in stone, you need some flexibility as the week unfolds, of course. But I wanted my players to have clarity.

Outside of that, we took the perspective of starting the week by having fun. Taking a crack and having some laughs, watching a funny video. Things like that to keep it light and help the team bond. From there, we would slowly ramp things up to Thursday night, where you have the more powerful speeches, videos and really focus in. It's this idea of first bringing the boys together and then getting them ready to go out and compete their hardest.

That's what the Ryder Cup is all about.