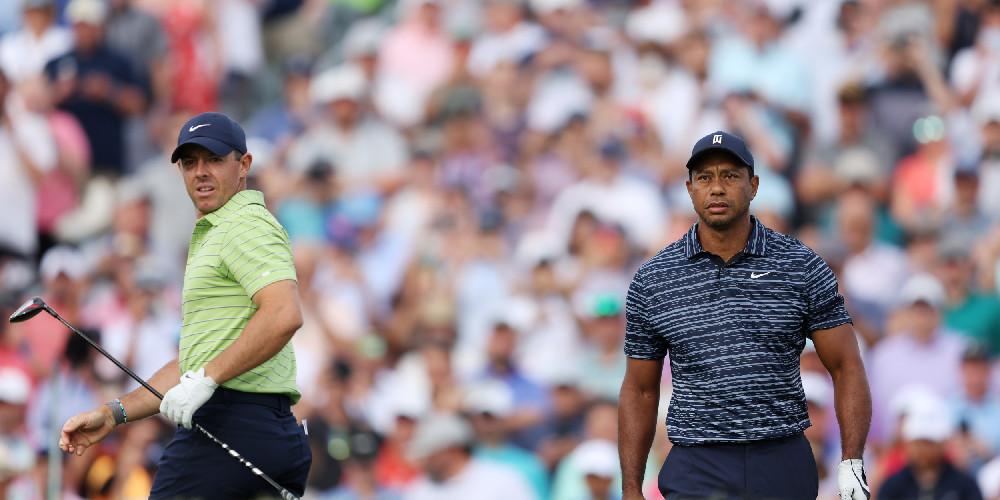 If you walked the driving range at Southern Hills this week and took a peek in each player’s bag, the common theme wouldn’t be hard to find: This is a second shot golf course. The evidence comes from the amount of long irons and high lofted woods that were being fine-tuned prior to today’s first round. Why? We’ll let our Senior Tour Manager Adrian Rietveld tell you.

“With the potential 20 to 30 mile an hour winds all week, you’re trying to keep it under the trees along the fairways and under the wind. In terms of stopping the ball on greens, because the winds are so high and the greens are so severe, your advantage is getting into play and into the right position and then using your mid irons and short irons to your advantage. Getting it in play is the key since there’s no first or second cut. It’s fairway and it’s rough. If you get greedy and you get a flier, it’s going to be a tough up and down.” – Adrian Rietveld

In our past champions blog, we outlined perhaps the most notable long iron addition with Tiger Woods adding a P·770 2 and 3-iron to the bag for those exact reasons. Let’s go deep on what other changes were made before the PGA Championship kicked off this morning in Tulsa.

In the case of Dustin Johnson, his length with driver and fairways creates an interesting set up, even before you factor in the demand of Southern Hills. For all of 2022, DJ’s bag has featured a Stealth Plus 10.5° driver, Stealth HL 16.5° 3-wood and Stealth 21.0° 7-wood. However, keeping the above analysis in mind, a lower flighted DJ Proto 3-iron wasn’t the type of shot he needed coming into greens.

On Wednesday, DJ worked with our Tour Reps to identify what would be the best second shot golf club for him at the top of his bag and landed on the Stealth 24.0° 9-wood. Yes, you are reading that right, a 9-wood. 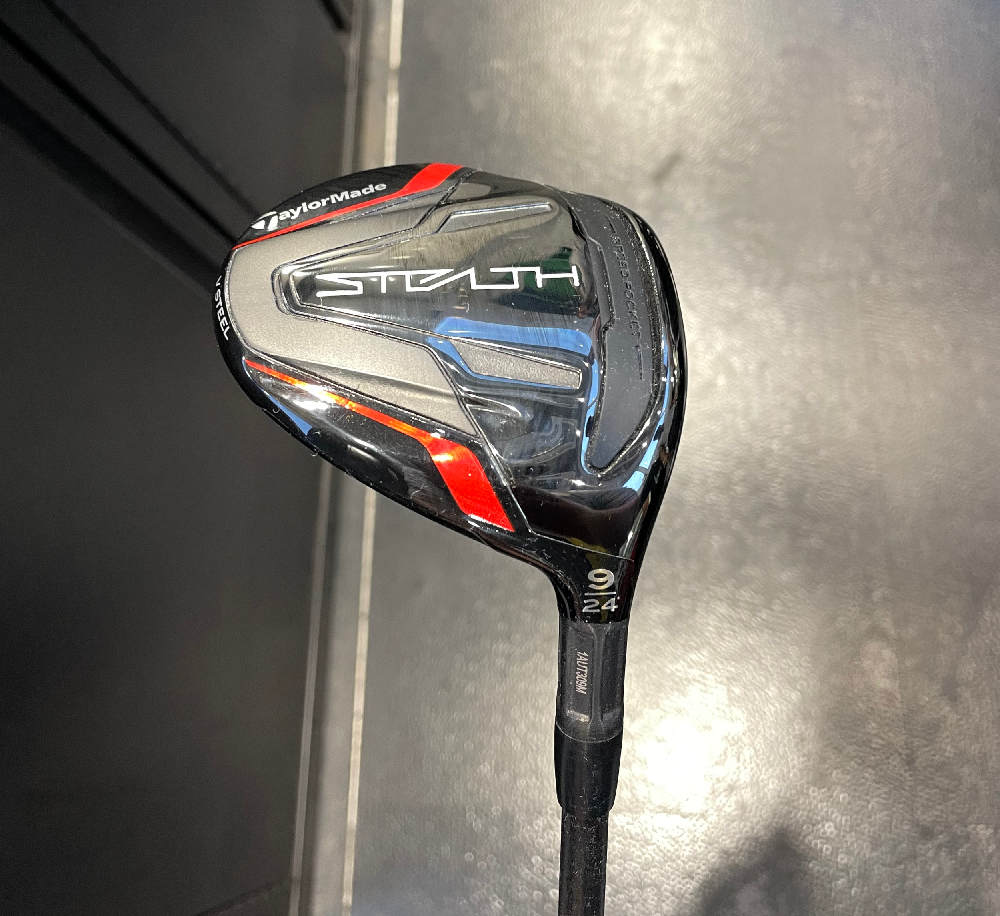 So, let’s get this out of the way first, the next time you see one of your golfing buddies roll up to the course with a 7-wood or 9-wood, save the jokes because one of the best players in the world is doing it too.

In our testing, DJ consistently hit his 9-wood 245-yards which is nearly the exact same distance he produces with his 3-iron. With the 9-wood however, he hits it much higher and gets more spin living around 4200 RPMs.

The rest of DJ’s bag is as usual until we get to the final and perhaps most important club, his flat stick. Last week at the Byron Nelson, DJ was walking to the putting green and saw our TaylorMade putter bag and was immediately drawn to Spider GT Splitback. After putting with it during practice rounds at Byron Nelson and this week at Southern Hills, the Splitback you see below got the call for round one at Southern Hills. 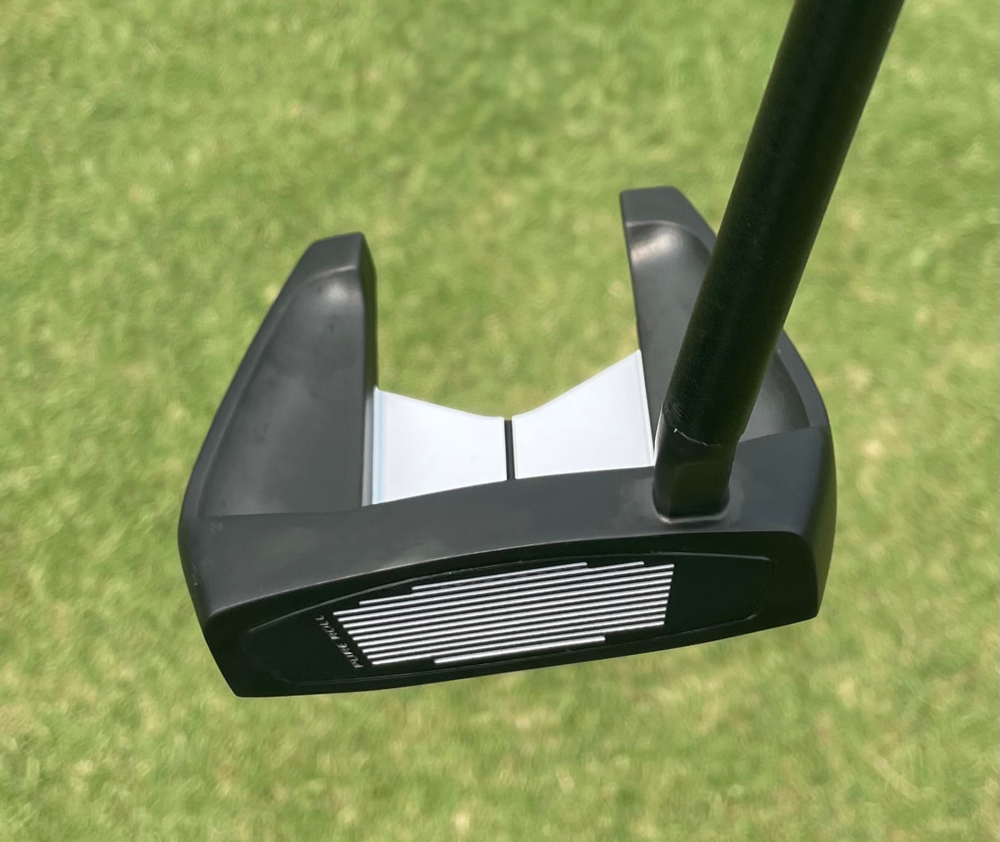 This decision is all about aesthetics and forgiveness. In constructing Splitback, TaylorMade engineers took weight from the wings and pushed mass to the perimeter which creates better stability and more forgiveness in a compact head shape.

“It’s all about the aesthetics. From the feedback I got from him, he grabbed it off the putting green because liked the longer shape in the back and felt it was more forgiving with the CG placement. The combination of a white cavity and the single sight line allows him to set it up square and align the ball easily.”
Bucky Coe, TaylorMade Tour Rep

It’s no secret. Few players are more in tune with the how’s and why’s of their equipment than Collin Morikawa. Once Collin saw the track in Tulsa, he asked our Tour Reps what he could do at the top of the bag if conditions demanded precision into and from the fairways.

On Tuesday, we spent time with Collin both on the range and on the course with two 3-iron options in the bag. Perhaps, with a little inspiration from Tiger Woods, Collin spent a lot of time testing a P·770 3-iron with two different shaft options. When he needs it, Collin will call upon the added forgiveness and faster ball speeds created by SpeedFoam™ Air and a Thru-Slot Speed Pocket in P·770. 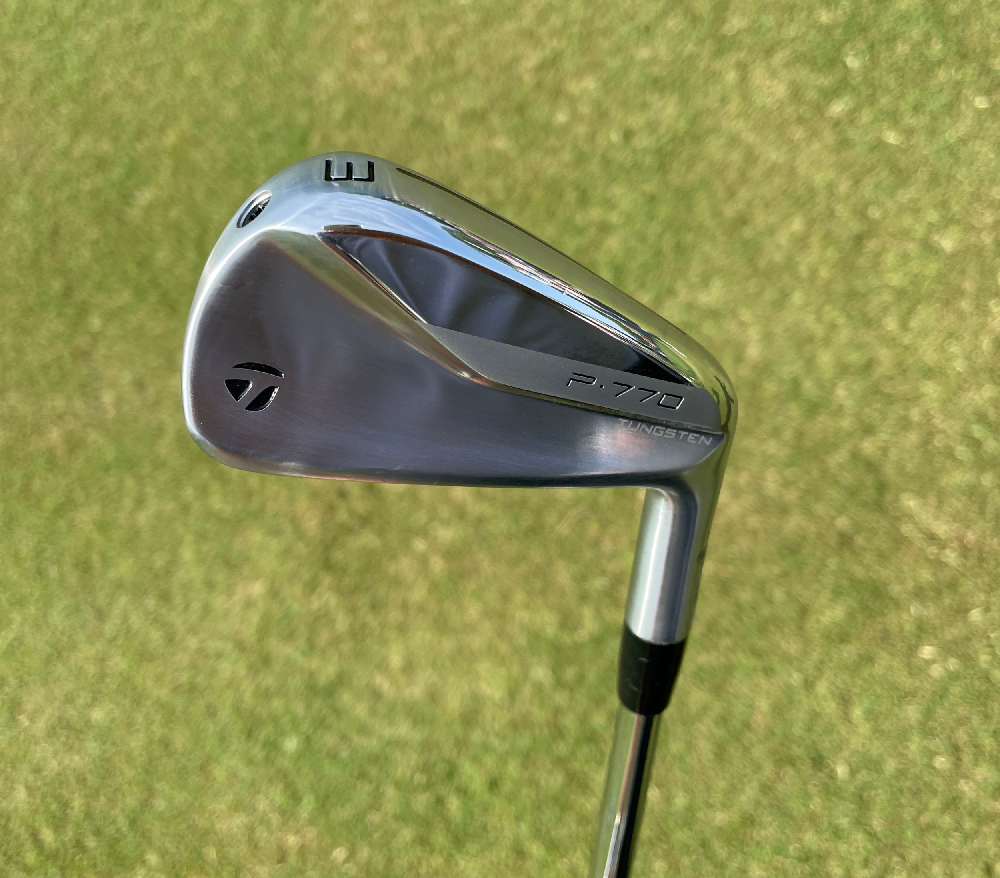 Collin tested both the Dynamic Gold X100 Tour Issue and Dynamic Gold Mid Tour Issue shafts (the same shaft Tiger is using in his P·770s) and eventually landed for the familiarity and comfort of the X100 which is in all of his P·Series combo set irons. When we talked to Collin about how he would use this club, he told us it will be a rotation between his Stealth Plus 5-wood and the P·770 3-iron completely dependent upon conditions.

In round one, Collin went with his 5-wood, but if the wind is blowing, which we expect to see over the weekend, we could see the P·770 3-iron in the bag.

There’s another Tiger inspiration in Collin’s bag, as this will be the second week in a row Collin has his Milled Grind 3 TW 60° wedge. For more on what went into that change, head over to our past champion's blog. 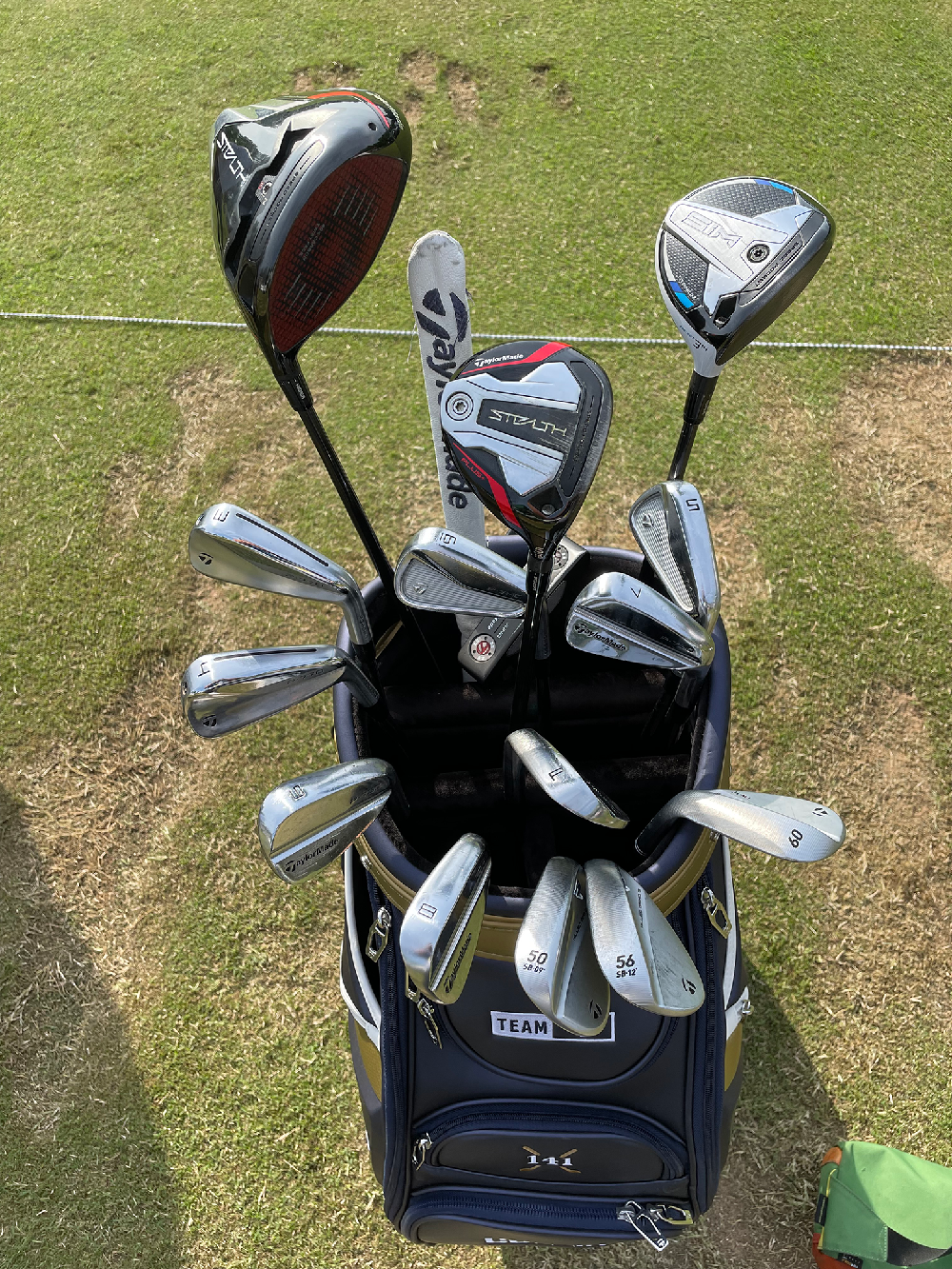 We throw the term “dialed” around a lot in golf, but if you’ve been watching Rory McIlroy swing the golf club the last two weeks, I’m not even sure dialed does it justice. That was evident in his opening round today with a 5-under 65.

We clocked him this week on numerous occasions living in the 189-190 MPH ball speed range, which is why we saw him deep down the Southern Hills fairways in round one (shoutout Stealth Plus’s 60x Carbon Twist Face). 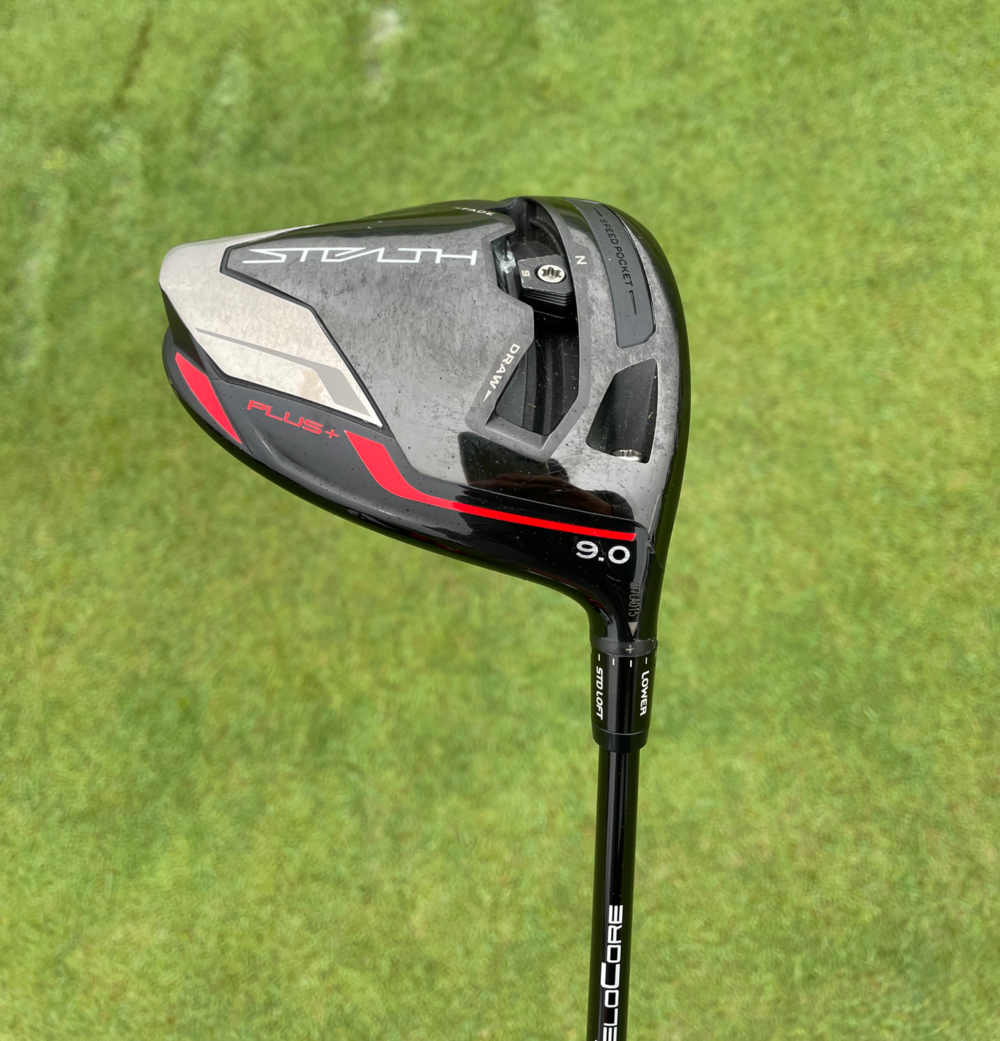 “I think he’s in as good a place as I’ve ever seen him driving the ball, in terms of his natural shot shaping with driver. He can hit draws, he can hit fades and he can hit straight shots whenever he needs to.”
Adrian Rietveld, Senior Tour Rep

The latest change to Rory’s bag came at TPC Potomac two weeks ago. After testing 10 3-wood’s at home in Florida in between The Masters and Wells Fargo, Rory found his winner and hasn’t looked back since. Previously, Rory was playing a SIM 3-wood at 13° but wanted to find a club that was more versatile in shaping rather than distance. His Stealth 15.0° 3-wood does just that hitting draws at 3100 RPM and 3600 RPM. Check out the rest of Rory's bag here. 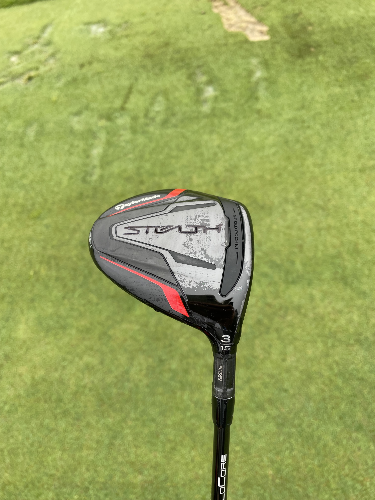 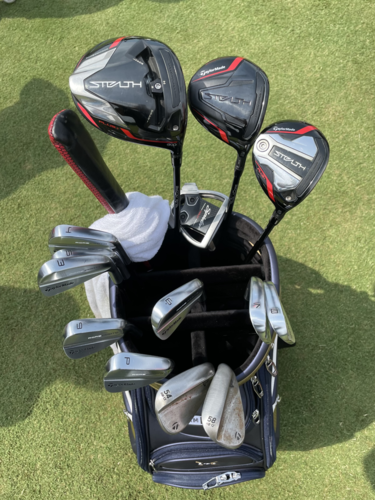 Tommy Fleetwood is one of six Team TaylorMade athletes that plays the Tiger Woods designed P·7TW irons, but here’s a fun fact you probably didn’t know. As told on the ForePlay Podcast on Wednesday at Southern Hills, Tommy actually was the first golfer to play the P·7TW’s. Yes, he played them even BEFORE Tiger!

“At Riviera one year (Tiger) looked in my bag and said, how did you get those? If that’s all I achieve in my golf career, then it’s going good.”
Tommy Fleetwood

For this week at Southern Hills, Tommy wanted a little more length with that exclusive P·7TW 3-iron, so we made it slightly stronger to give him the length and flight he was looking for. Check out the rest of Tommy's bag here. 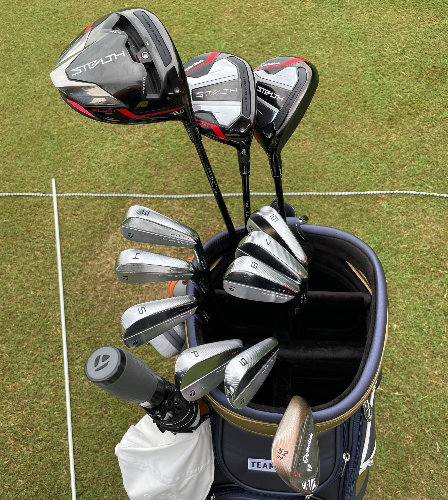 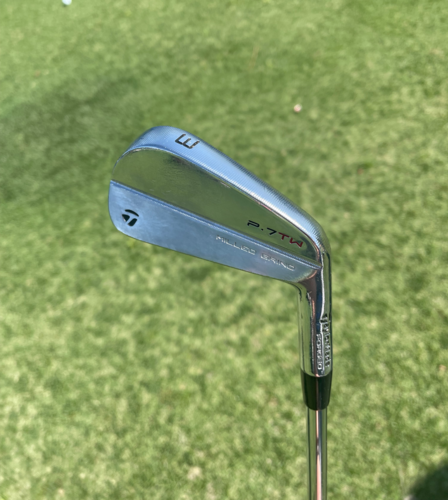 World No. 1 Scottie Scheffler's bag remained the same this week, but continuing this theme of second shot importance let’s take a glance at a few more notable changes this week.

Nicolai Hojgaard, who is making his major championship debut, followed the Dustin Johnson route and added a Stealth 21.0° 7-wood to the bag in place of his P·7TW 3-iron. Our guy Harry Higgs opted for a stronger lofted hybrid, bringing back his Stealth Plus rescue, but with a 17.0° head compared to his 19.5°.

Robert MacIntyre and Lucas Herbert both had UDI’s in the bag during practice this week, as their SIM UDI and P·790 UDI respectively have been in play this season on courses similar to Southern Hills. Lucas also has a new big stick as he’s still rocking a 9° Stealth Plus, but set to the standard sliding weight setting and set a degree higher on his 1.5° loft sleeve. We also made his fairway woods a touch flatter to hold those Southern Hills fairways.

Lastly, as outlined in our past champions blog, Martin Kaymer added a new Hi-Toe RAW wedge with 9° of bounce, in order to aid short pitch shots and bunker play.

Lock in…we’re headed for a great week at the year’s second major! Stay tuned to Clubhouse and social as we will check in on Team TaylorMade throughout the weekend.