“From the creation of the first metalwood in 1979, TaylorMade has established a legacy of breaking from tradition to reach new thresholds of performance. In 2018, we have once again uncovered a new frontier of driving potential with Twist Face Technology — a radical departure from traditional driver-face design, engineered to correct for inherent human swing tendencies in real-time, giving golfers a tangible competitive advantage.
Brian Bazzel, Vice President, Product Creation

To counteract the high-toe miss (a hook), the driver face has been ‘twisted’ open (loft increased & face opened) on the high-toe to help straighten ball flight. Similarly, to counteract the low-heel miss (a slice) the driver face has been twisted closed to de-loft and close the face in the low heel area. Ultimately, Twist Face technology delivers a corrective face angle when hit off-center for longer, straighter shots.

We've captured more than half a million shots that simultaneously tracks head presentation (in-out path, angle of attack, loft, impact location), initial launch conditions and final landing location of the golf ball. In studying that data, our engineers discovered there was a flaw in the traditional bulge and roll. By studying the performance of thousands of shots in each quadrant across the face of all golfers’ levels, researchers determined these shots were not averaging to be on the center line. In fact, high face shots and high toe shots have a left tendency of the target line and spin significantly less. Similarly, low face and low heel shots tend to land right of the target line with a significantly more spin. 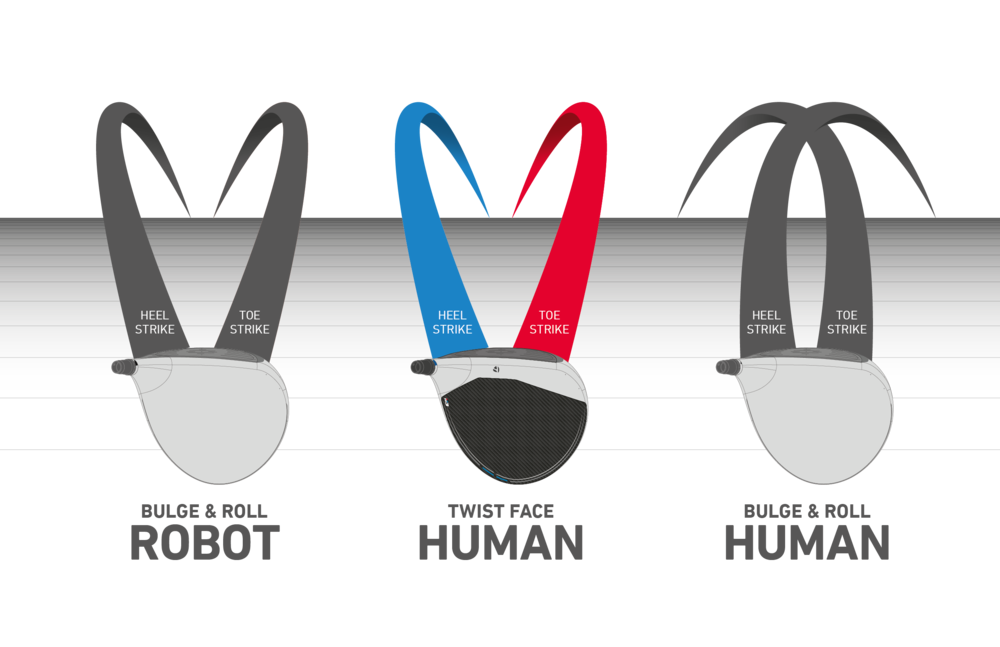 Exclusive to the M3 in both the 460cc & 440cc models is a new intuitive Y-Track adjustability system that allows for CG adjustment of the head to obtain desired, optimal ball flight parameters. Dissimilar to the T-Track on both the 2016 & 2017 M1 drivers, the heel to toe track and front to back track on the M3 are connected, allowing all 22 grams (two 11g weights) of movable mass to be utilized for both the benefit of heel to toe control as well as front to back CG adjustment. The Y-track gives the golfer more precise CG adjustability than before with more than 1 000 unique CG configurations — more than double the number of positions in the 2017 M1. Add in our 12 position, 4-degree Loft Sleeve and the result is an unparalleled level of personalization.

The flat curvature of the front/back track provides the lowest CG possible regardless of the weight setting. When the weight is in the back position versus M1 2017, the 2018 M3 CG is 36% further back. This makes the moment of inertia (MOI) 10% larger without raising the CG projection on the face.

This year will also be the first time our adjustable driver features a slot. The new Hammerhead slot was engineered to work in combination with Twist Face and Inverted Cone golf driver technology to deliver maximum ballspeed across a larger area of the face for a larger sweet spot. 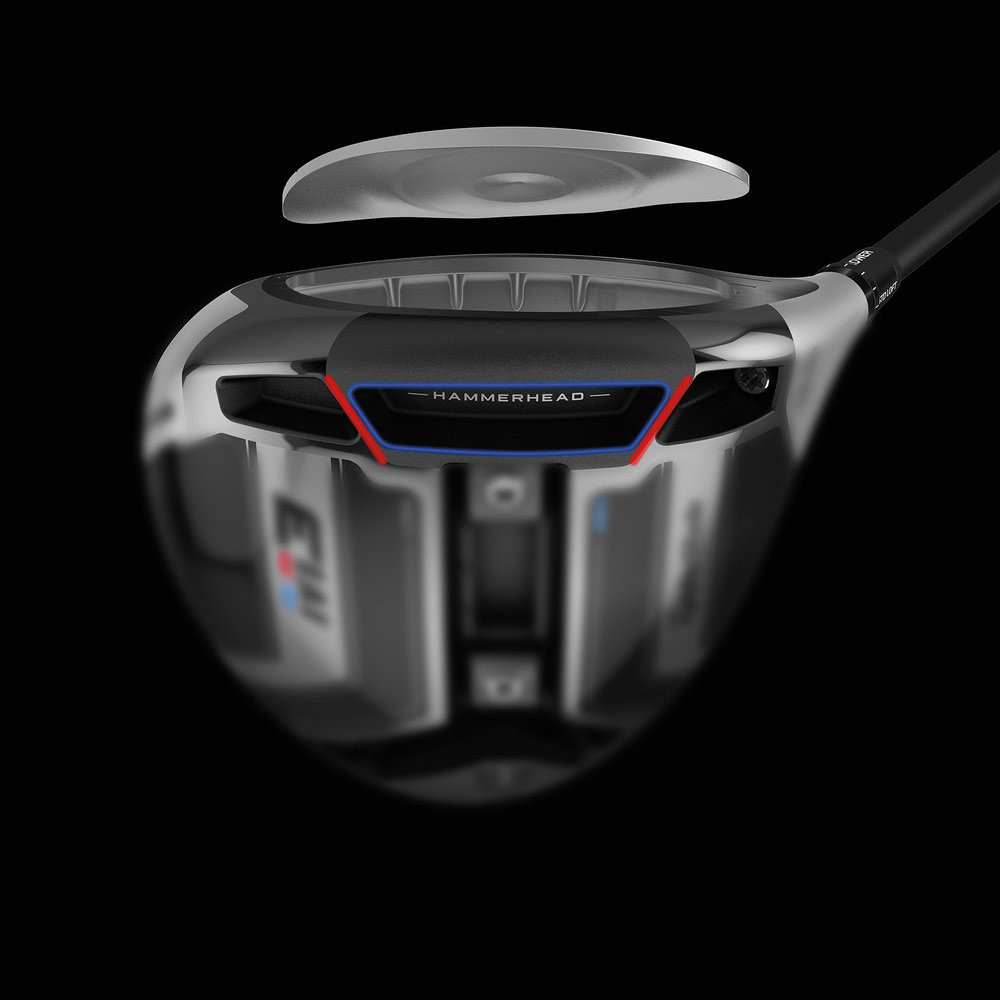 By dividing the Speed Pocket into zones, we're able to increase its overall length from 82mm to 100mm — a 22% increase. Additionally, it allowed for the creation of a larger flexible center zone, designed to increase ball speed on low face impacts and drop unwanted backspin.

Following the success and demand for the 440cc version in 2017, the M3 will again be available in a 440cc model, which utilizes a slightly smaller head, deeper face and 22g of moveable weight, working in unison with all of the same technologies as its larger 460cc counterpart. Both the 460 and 440cc models come equipped with MCA’s popular Tensei CK Red (high launch), Blue (mid launch) or White (low launch) shafts in R, S & X flexes along with a Lamkin UTx cord grip. As the company has offered for the past few years, TaylorMade is also once again offering more than two dozen additional premium custom shaft options at no upcharge.

The new M3 fairway takes a premium, adjustable fairway to the next level. Constructed with a 450 stainless steel body, strong Ni-Co C300 face and new, thinner 5-layer carbon composite crown (same as the M3 & M4 drivers). An improved track system that houses more moveable weight (29 grams compared to 25 in the ’17 M1 fairway) allows for the adjustment for preferred shot shape; from fade to draw, more than ever before. Similar to the M3 driver, the M3 fairway also utilizes an ultra-thin, ultra-light crown and sole panel. The combination of the composite panels saves up to 8g over a similarly shaped metal fairway. The discretionary weight is placed low and forward into the M3’s clubhead to create driver-like launch conditions (high launch & low spin).

The sliding weight track (SWT) on the M3 fairway, first introduced in a TaylorMade fairway with last year’s M1, incorporates a new, smaller Loft Sleeve screw, which allowed for the moveable weight track to move 3.5mm forward, which resulted in the CG moving almost a full millimeter forward too, an 8% change over the ’17 M1.

Bringing the track forward led to a more streamlined overhang design which led to improving the sole to turf interaction for the M3 fairway. By designing an overhang that extends across the length of the track the playability of the sole was improved while allowing the weight track to be further forward.

The smaller screw head and port area to the Loft Sleeve also positively affects the Speed Pocket. By taking up less room on the sole, the Speed Pocket length from heel-to-toe on the M3 fairway is longer than the M1 2017 Speed Pocket. The through-slot is extremely efficient in terms of size and material usage, giving us the ability to package it in front of the track. The through-slot promotes faster face-flex and ball speed on mishits low on the face and also reduces backspin leading to more overall distance.

The new M3 Rescue incorporates a moderate sized, Tour-proven and preferred shape first introduced by the ’17 M1 Rescue but with more moveable weight — 30g compared to 27— and a successful sole design that will appeal to players of all ability levels. The crown showcases a whole new look with a premium two tone, matte silver front section and gloss black back body framing the ball beautifully. The sole is engineered with a performance-driven adjustable sliding weight system, allowing golfers the opportunity to not only experience the neutral/fade biases of its predecessor but having more moveable weight for increased personalization.

In addition to the new 30g sliding weight and advanced sole design, the head comes equipped with a 3-degree ultra-lightweight aluminum Loft Sleeve. Premium components again are offered as stock options, with a MCA Tensei Blue hybrid 80g shaft in R, S & X flexes as well as a 70g A flex along with a new Lamkin UTx cord grip.

Complementing the M3 driver is the M4 driver, which differentiates its design by putting an emphasis on forgiveness. The M4 driver not only utilizes Twist Face & Hammerhead, it also incorporates Geocoustic engineering –combining geometry and acoustical engineering to unlock more forgiveness and best-in-class sound.

Driver heads with low back centers of gravity typically have low frequencies because they tend to have fairly flat soles. Geocoustic sole shaping allows for a low CG and larger head size, but with a more curved sole which has inherently higher frequencies, leading to better sound and feel.

Similar to the M3, the M4’s Hammerhead slot features reinforced outer portions for a lighter, more flexible face, which results in a larger sweet spot. The center portion of the slot increases ball speed low on the face and drops unwanted spin for straight distance. Additionally, the newly designed face saves 8g of discretionary weight. To increase the stability of the driver, the rearward mass pad has been increased from 22 to 41 grams – an 86% increase. 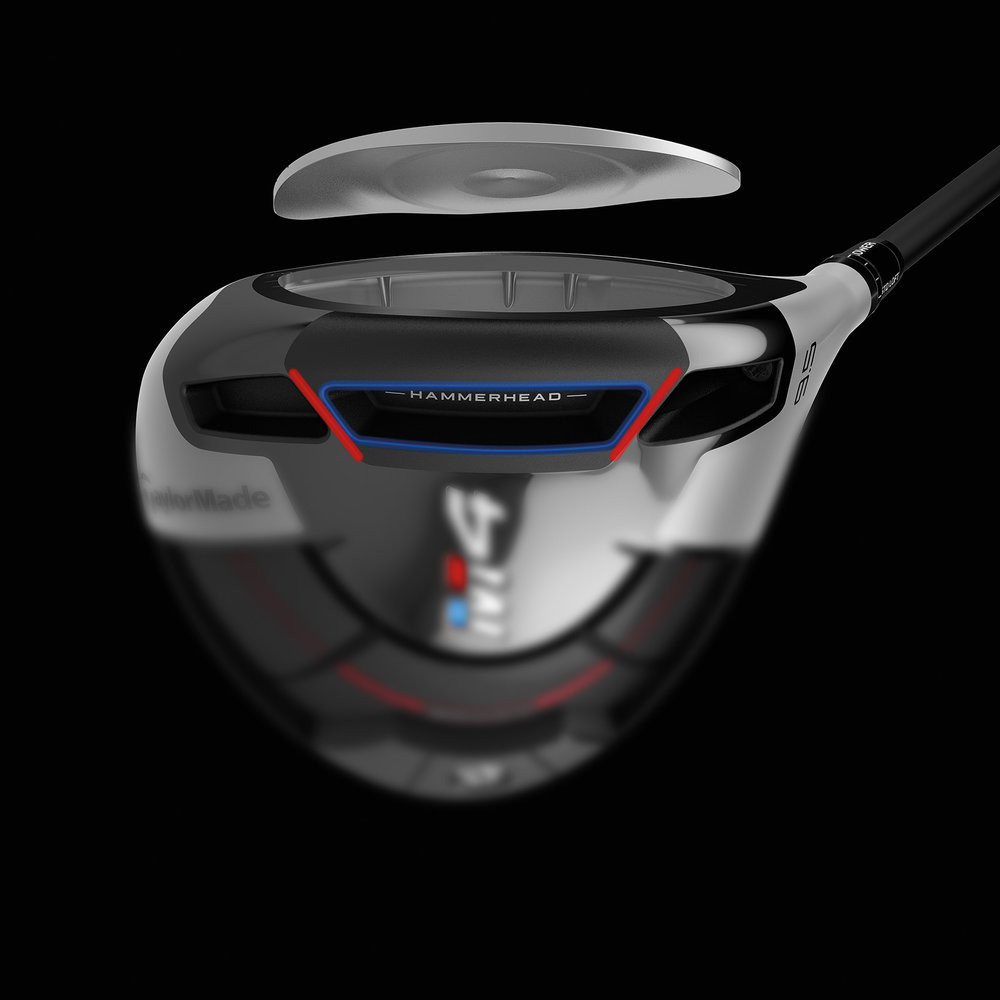 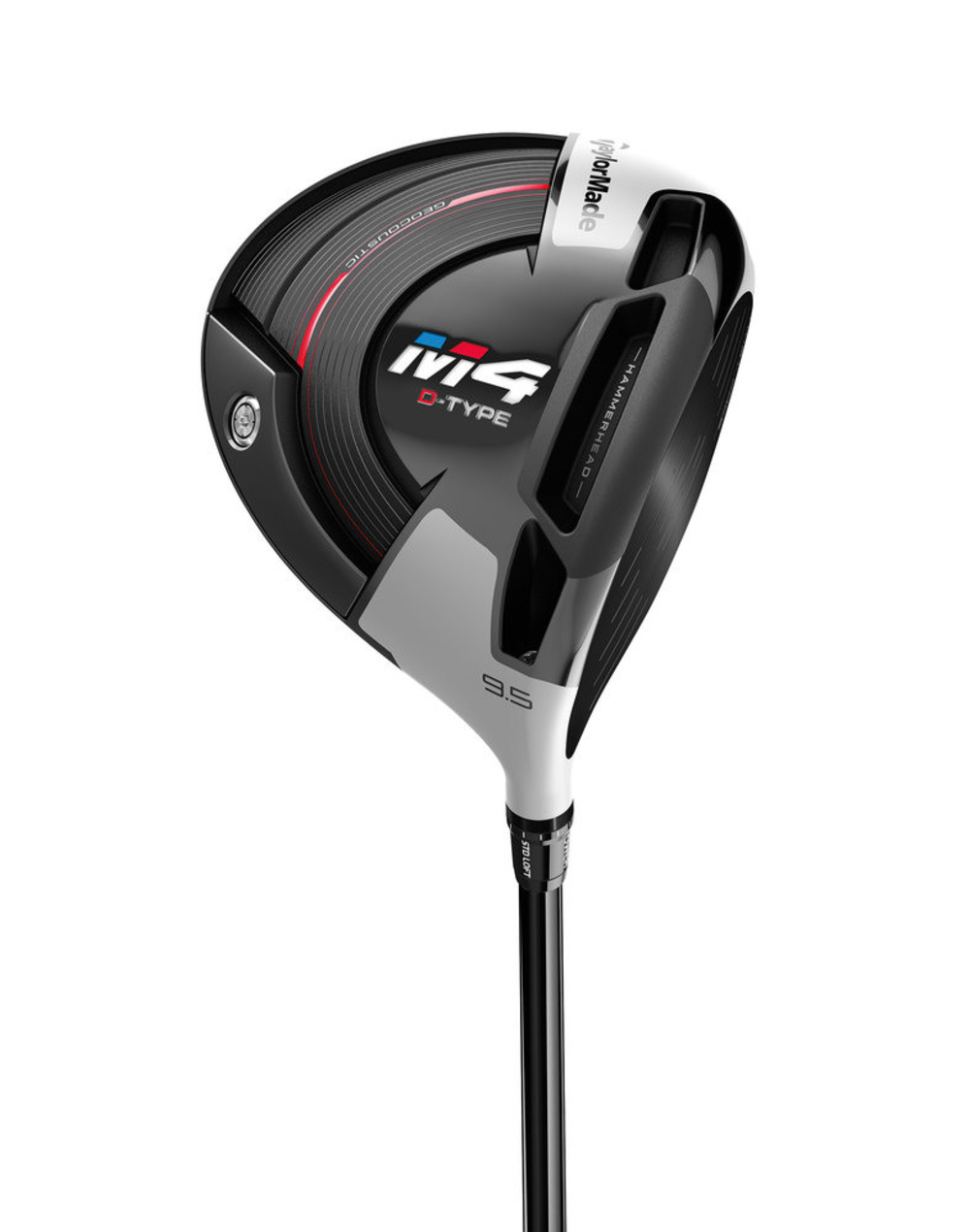 The M4 fairway has been made for forgiveness, taking everything learned from the use of multi-material composition, Speed Pocket, Geocoustic Technology and ICT integration to deliver a remarkably high-performing complement to the M4 driver that delivers maximum distance and forgiveness by way of a larger sweet spot and more optimal launch conditions. A new split-weight mass pad separates the weight at the outward extremities of the head to preserve ballspeed on shots hit off-center.

In addition to the M4 fairway, TaylorMade is also introducing the M4 Tour fairway, which features a smaller head size (156cc versus 175cc) with a slightly deeper face, designed for better players who prefer a more compact look, lower launch and more workability.

Completing the M4 metalwood lineup in 2018 is the M4 Rescue. Power and control are the essential ingredients golfers need when playing a hybrid. M4 offers the best of all worlds with key performance technologies working in sync to produce exceptional ball speed and a larger sweet spot for enhanced overall playability.

The low-profile body of the M4 Rescue has a tiered two-tone crown with the same matte silver front and gloss black rear section that showcases the distinctive, widely recognized aesthetics TaylorMade’s M series of product has become known for.

The M4 Rescue features a cut-through Speed Pocket to increase launch and maximize ballspeed on shots hit below center face. Similar to the M4 fairway, a new split-weight mass pad separates the weight at the outward extremities of the head to increase the club’s forgiveness by preserving ballspeed on shots hit off-center. In addition to the added forgiveness, a Geocoustic sole design and a short, fluted hosel work in tandem to optimize sound and feel at impact. The M4 Rescue is designed to help average golfers replace a long iron with higher, longer and more draw-biased performance.

All metalwoods will hit golf shops on February 16 with pre-order availability on February 2nd.