Scottie Scheffler’s Stealth Plus driver and P·7TW irons have had quite the year in 2022. Let’s go deep on the set up for our newest member of Team TaylorMade, who has won three tournaments in his last five starts with TaylorMade equipment in the bag. But first, hey Scottie…why did you choose to join Team TaylorMade?

"TaylorMade equipment has been integral in my career for many years, and I couldn’t be more excited to formally be a part of their roster of elite golfers. I’ve worked with TaylorMade’s team on Tour for multiple seasons and their commitment to getting the right equipment in my bag was a driving force in joining Team TaylorMade. Continuously working to get my game to the highest level will always be at the forefront of my approach and I am thrilled to combine my passion for success with that already established culture at TaylorMade." - Scottie Scheffler

Every off season, PGA TOUR pros begin their path back to tournament golf by testing new gear at their home courses. That was no different for Scottie when our TaylorMade Tour reps flew down to Texas in December to work with the now World No. 1.

It was a windy day and weather conditions prevented Scottie from getting out on the course, but despite being limited to just a range session, a love affair between Scottie and his Stealth Plus 8.0° driver began. 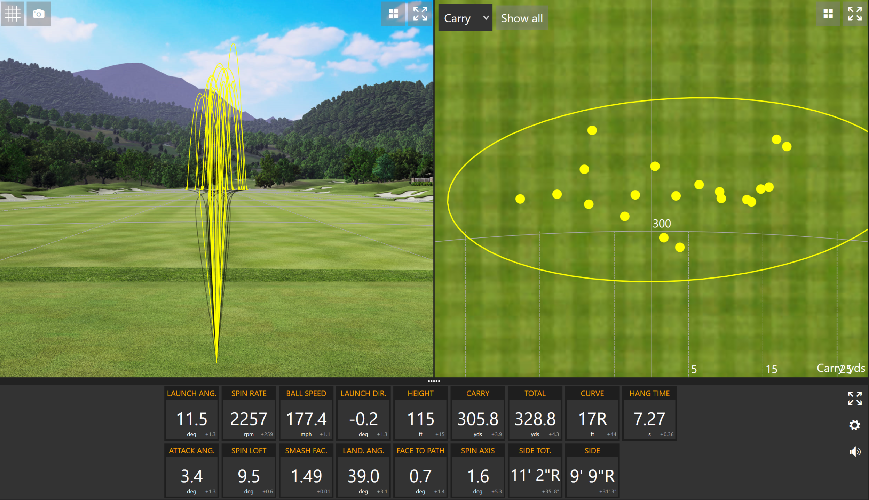 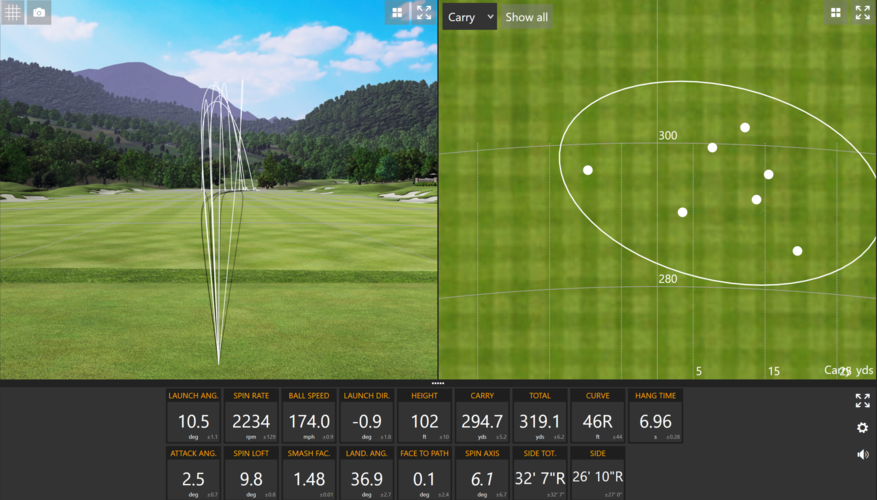 He hasn’t looked back since putting Stealth Plus in play at the American Express in January and has seen an average increase of 4+ mph ball speed in tournament competition compared to his 2020-21 season average.

“During our initial driver fitting, we were working on the range into a pretty substantial wind. He was delivering some amazingly consistent golf shots. Without us being able to test on course, he turns up at his first event of the year with only one driver in his bag, which shows how confident he was with the club. I guess the rest is history." - Adrian Rietveld, TaylorMade Senior Tour Representative

During practice rounds in Augusta, Scottie made slight alterations to his driver to allow him to better move the ball from right to left – as the course famously benefits the draw (for right-handed players). Leaving no stone unturned on the way to his first major, he worked with our team to perfect a backup driver built to match the exact specs of his gamer. 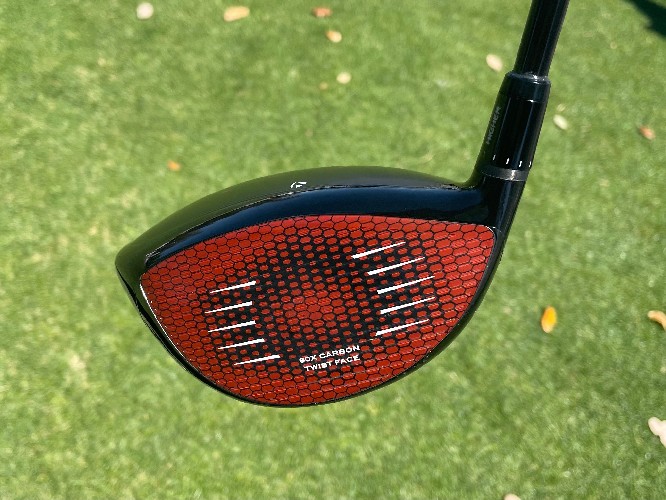 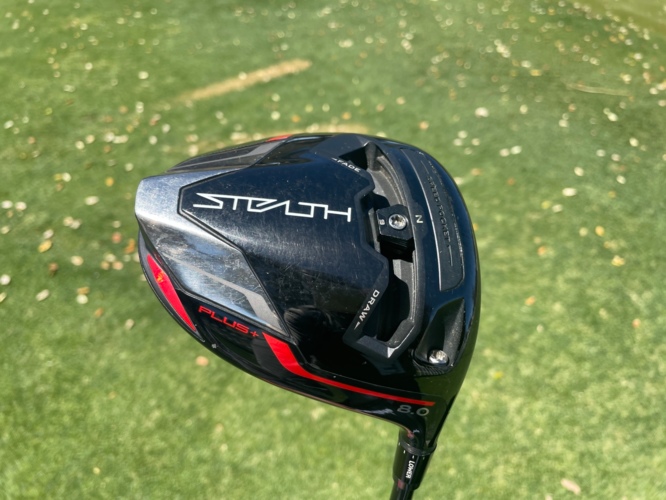 Scheffler has had his Carbonwood™ driver in the bag since The American Express and has racked up the following: 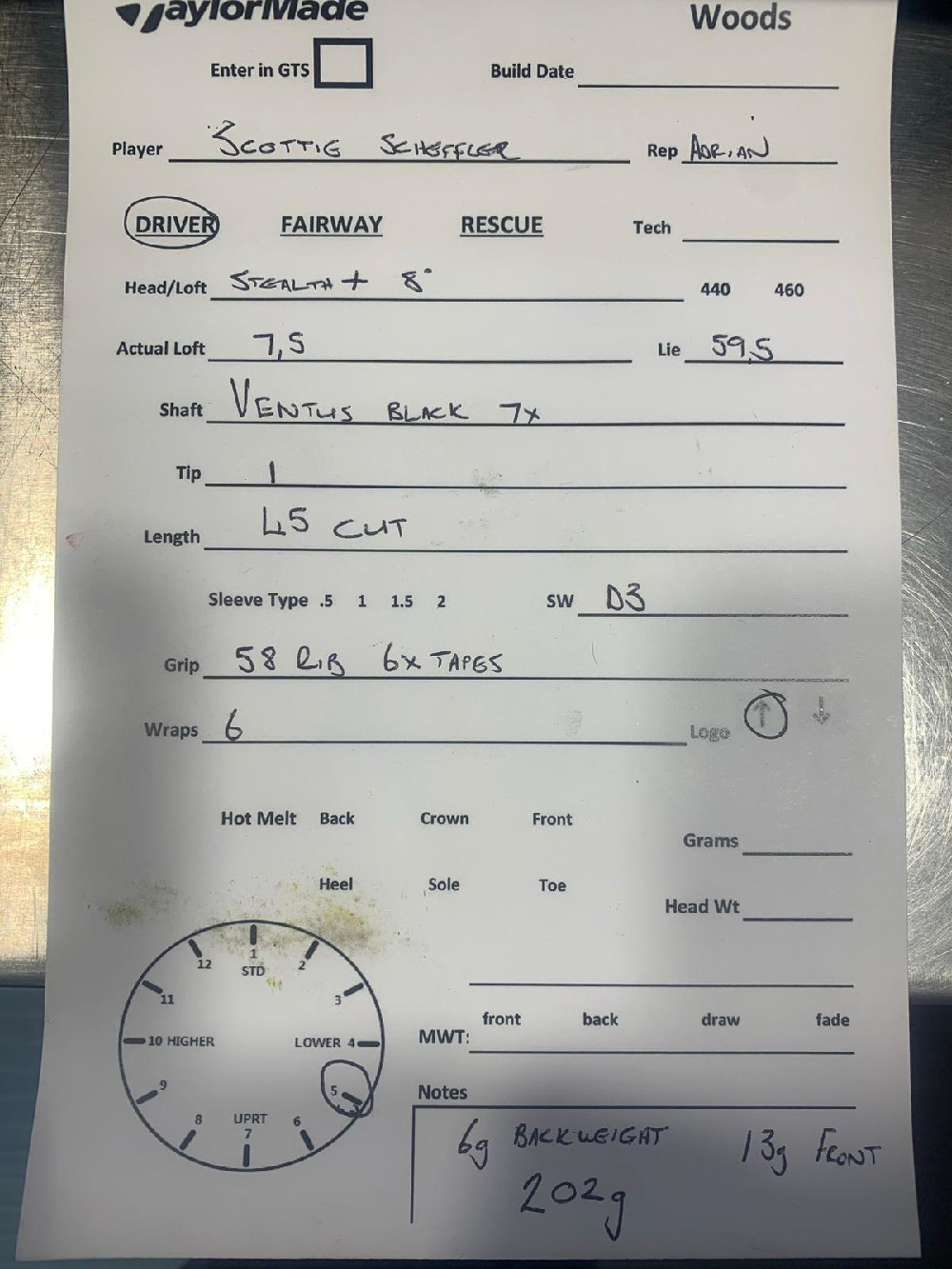 Scottie’s latest TaylorMade addition to the bag is his Stealth 3-wood, which is our high launch version with a 16.5° loft. Why is a high launching 3-wood instead of the standard 15.0° or 13.5°? Scottie just hits it too far – that is a tough concept to grasp for us mere mortals!

“After testing the Stealth 15.0° head in the preseason, which was simply going too far for the types of shots Scottie was trying to hit, in Palm Springs at The American Express we built him a Stealth 3HL 16.5° head with a Ventus 8X shaft. His previous 3-Wood was about 12.5° of loft and in order to match launch conditions and distance with Stealth, we had to go to the Stealth 3HL, make it an inch shorter and finish the loft at 16°. We were really close with matching launch conditions, which was important to Scottie. It was coming out of a different window because of the difference in loft in the heads and he has since been able to figure out how to flight it the way he wants to.” - Todd Chew, TaylorMade Senior Tour Manager

The 16.5° Stealth head (bent to 15°) is more of a weapon for Scottie because of the distance and height capability. That is the benefit of taking a lot of the spin out of the head and being able to use more loft compared to older technology. With the previous club, you wouldn’t want to launch it higher in the air because it would spin too much. However, with the advanced technology TaylorMade’s R&D team was able to deploy into the Stealth fairways that takes so much spin out of the club, Scottie can use more loft to make the club more playable and versatile. See the full spec below: 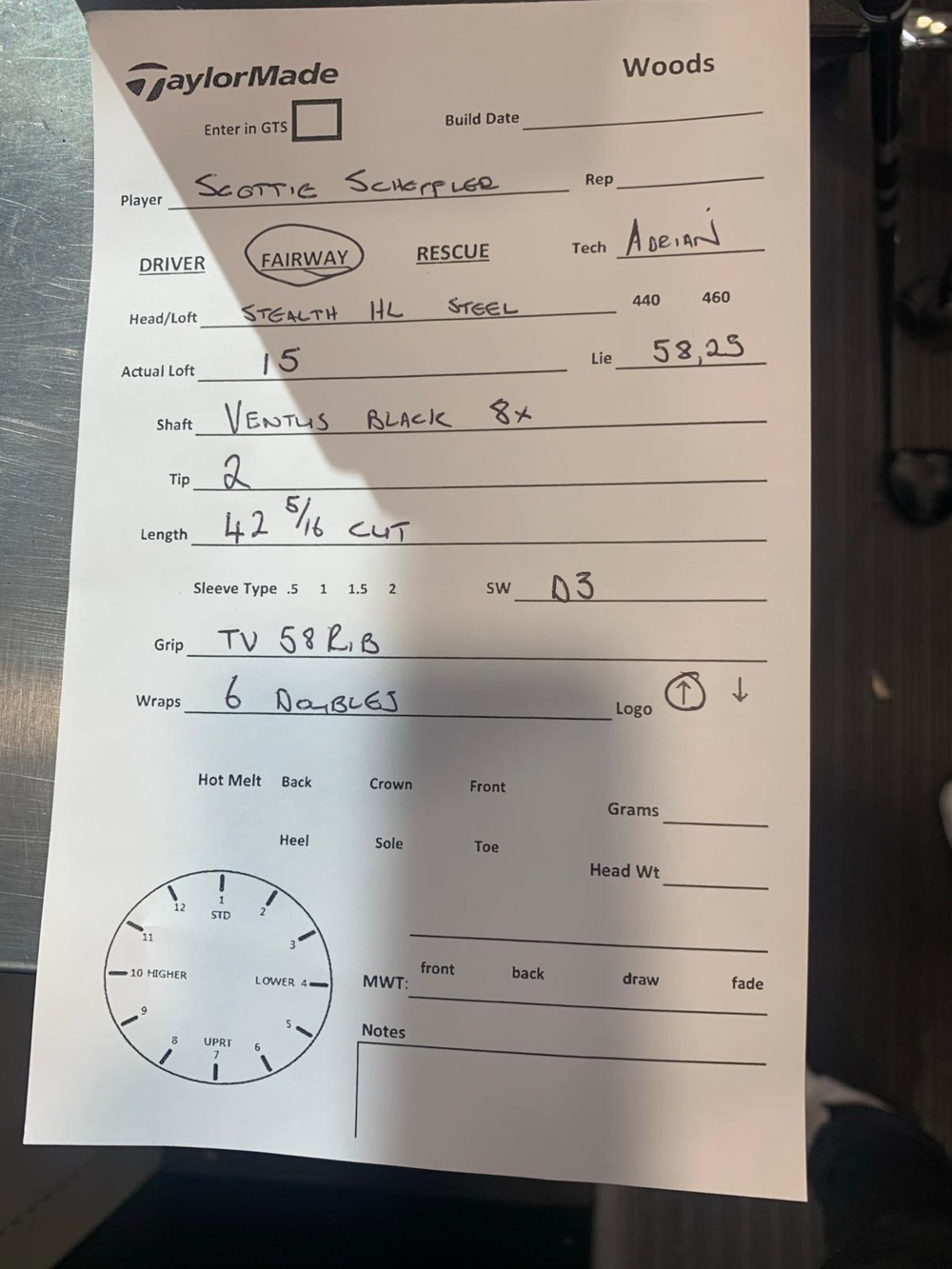 Scheffler has had the P·7TW irons in the bag since the 2021 American Express, while previously playing TaylorMade’s P·730 irons. After seeing the P·7TWs being played by many of his competitors, Scheffler expressed interest in late 2020 about playing the irons to be able to hit more types of shots with the capability the Tiger Woods inspired irons possess. Since putting them in the bag, Scheffler has 13 Top 10s, four PGA TOUR wins and a Ryder Cup.

“Scottie is such a good iron player and he tested the Tiger irons by himself with his coach and then we made adjustments and he was good to go and he’s never looked back since. The sole geometry of the blade is very important in the delivery of the club. Tiger’s design is similar to what a lot of pros including Scottie played growing up. With the soles being a precision production milled grind, we have the ability to make the sole identical club after club after club because of the process we follow.” - Adrian Rietveld 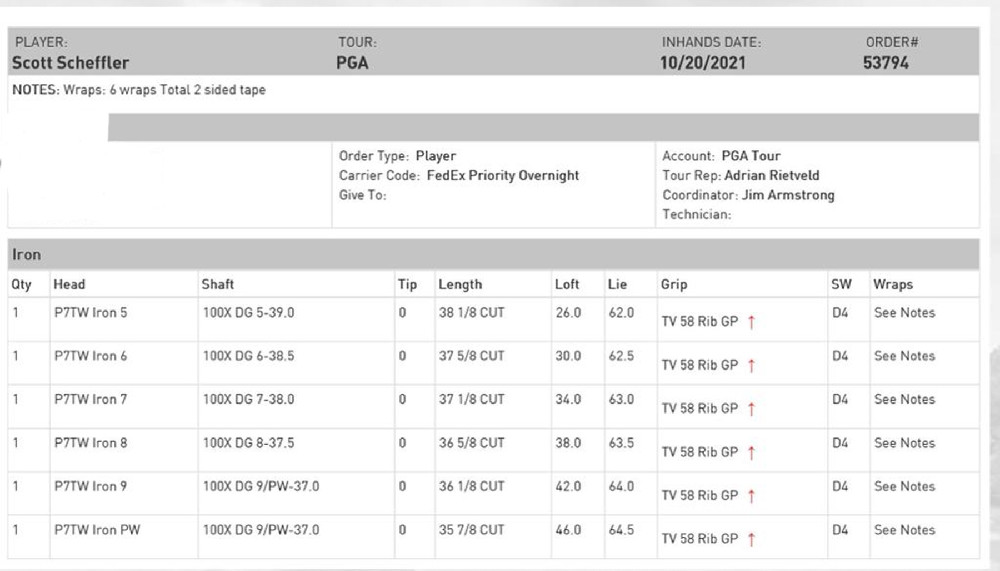 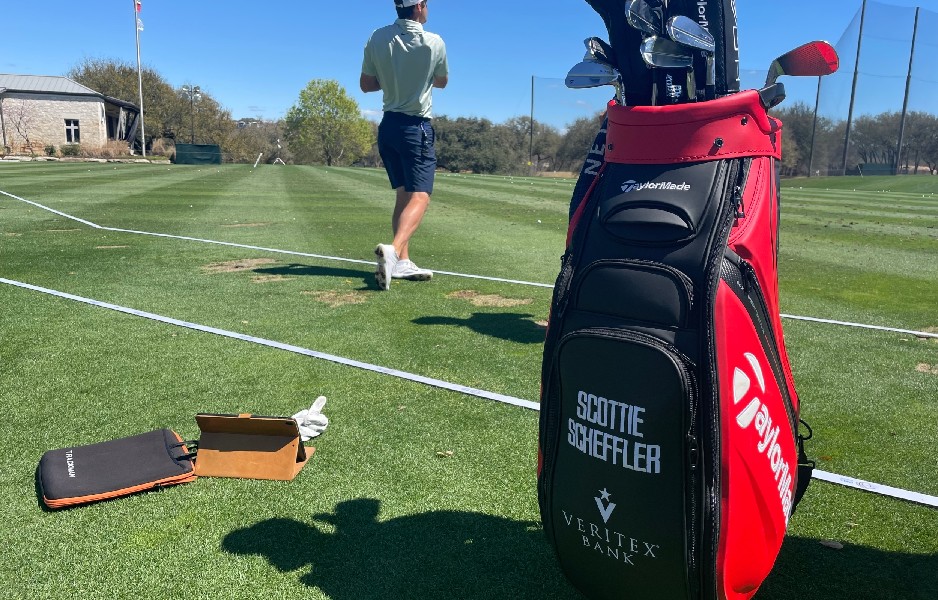 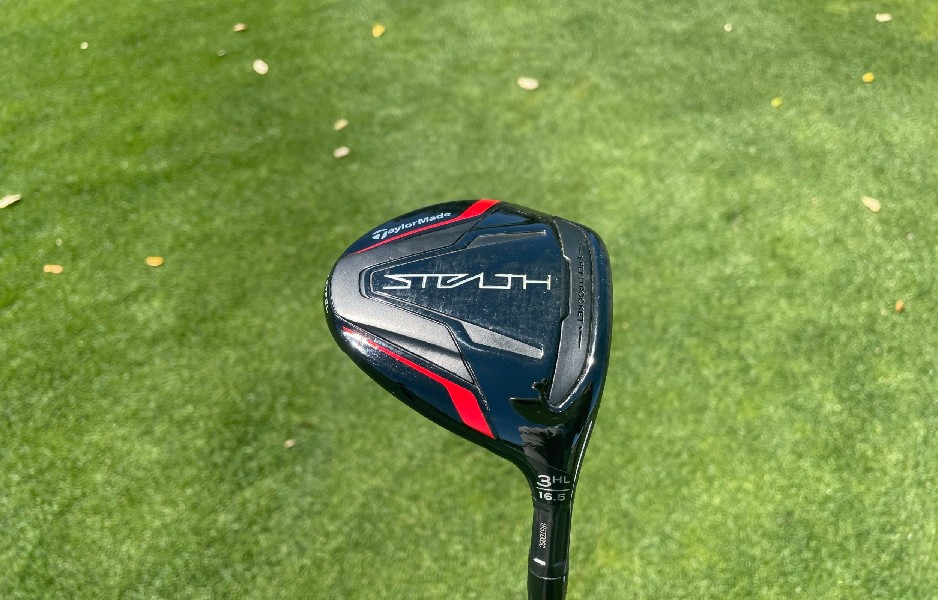 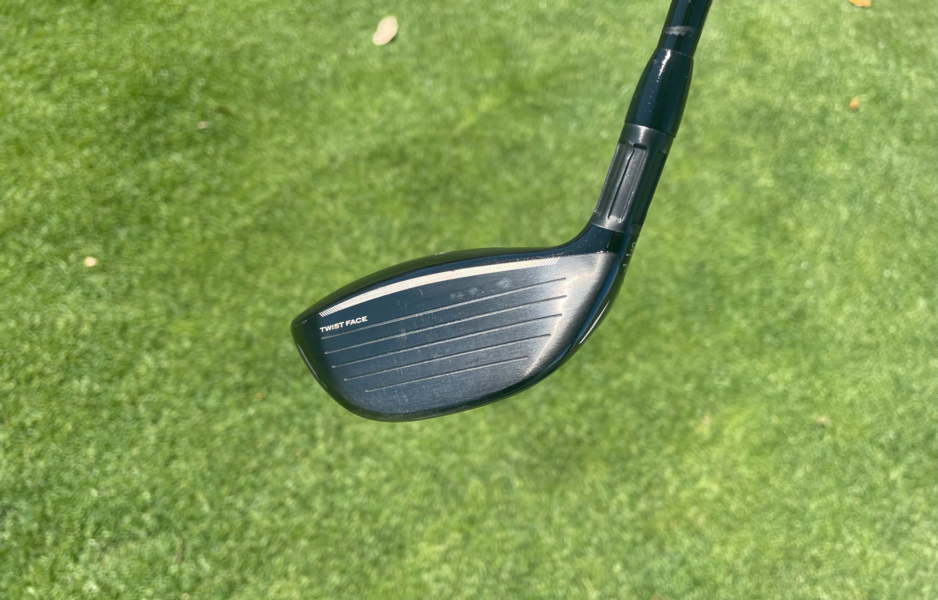 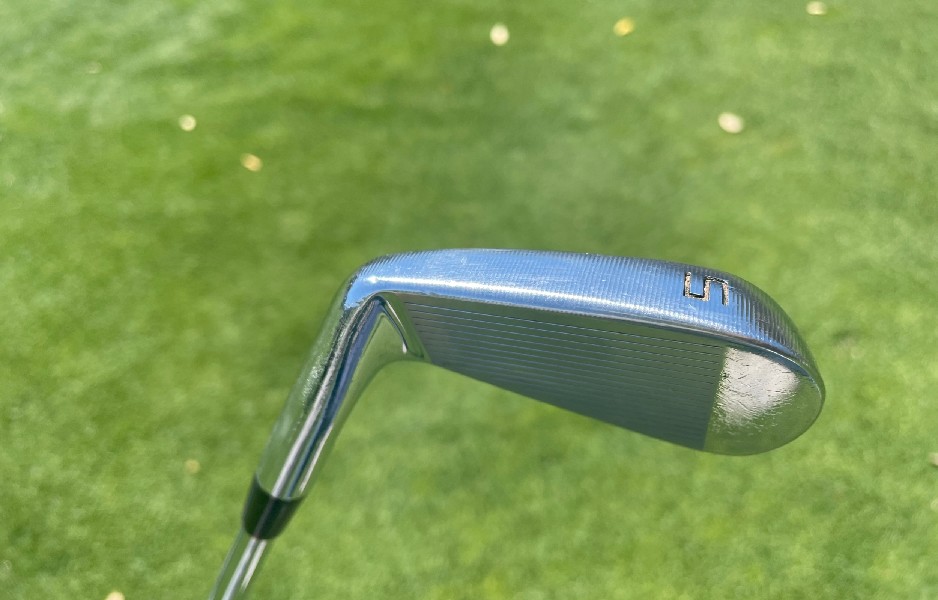 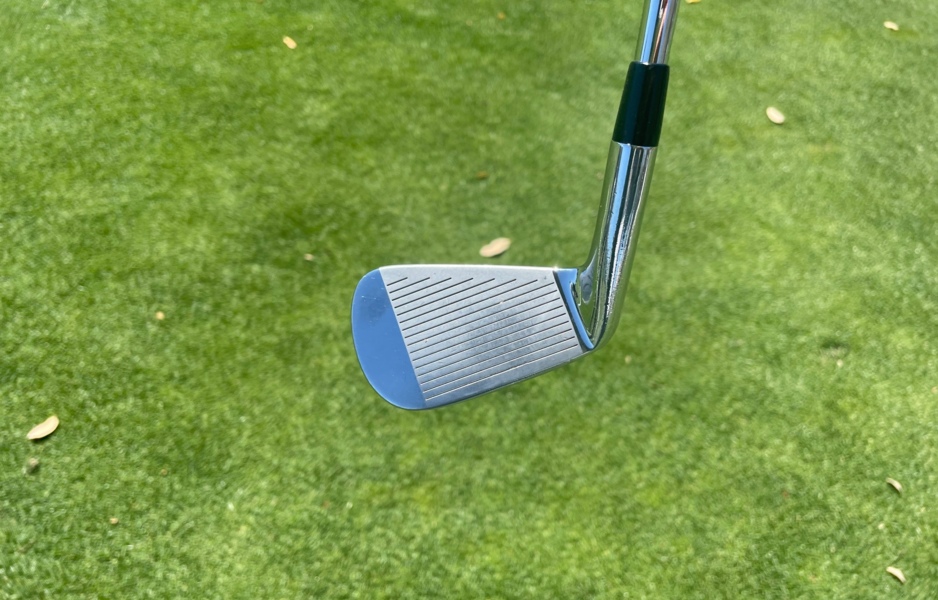