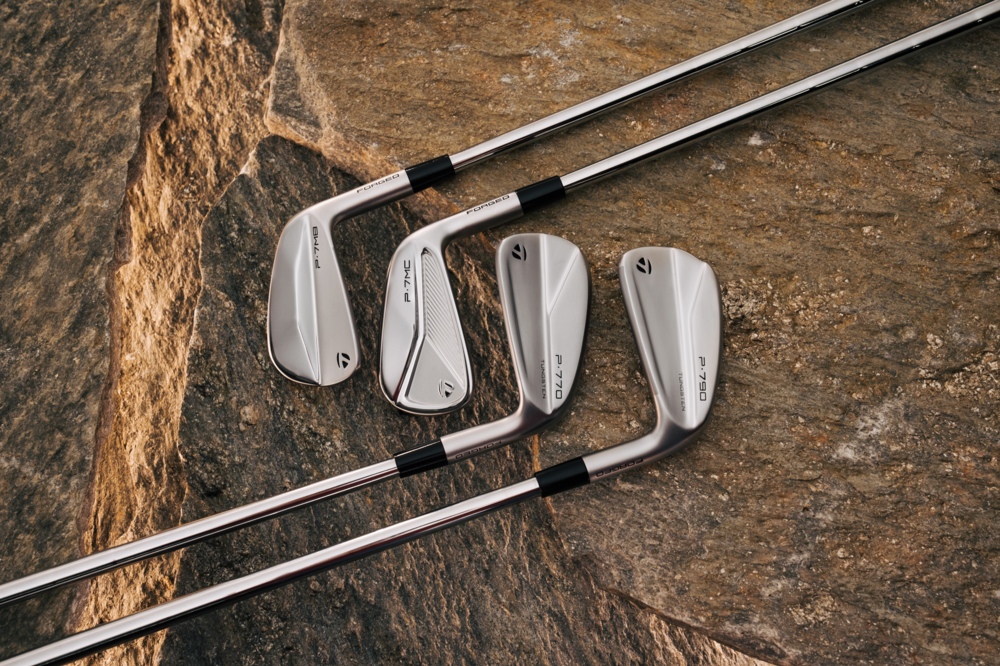 The "P" stands for Players.

TaylorMade's collection of P·Series irons runs the gamut from pure blade to compact powerhouse. Common threads are elegance and minimalism, with each design crafted as a ball striker's dream.

Let's start with the purest of them all, P·7MB. You've probably heard muscle backs described as butterknives. If that's the case, this is the fine silverware grandma only brings out for holiday dinners. Masterfully forged using a 2,000-ton press to ensure a uniform grain structure and the purest possible feel, these irons are intended for the most skilled of players.

That said, where do we go for ideas on improving these beauties? Straight to the source. Utilizing feedback from some of the game's elite iron players such as Rory McIlroy and Collin Morikawa, the newest P·7MB features a shorter blade length, new sole geometry, and progressive offset to create a minimalist profile made to control shot shape and trajectory.

The new P·7MB sole is one millimeter narrower than the previous gen. As with modern golf club design, minor changes can lead to meaningful results. The thinner sole facilitated more bounce on the leading edge, creating a noticeably different sensation through the turf. 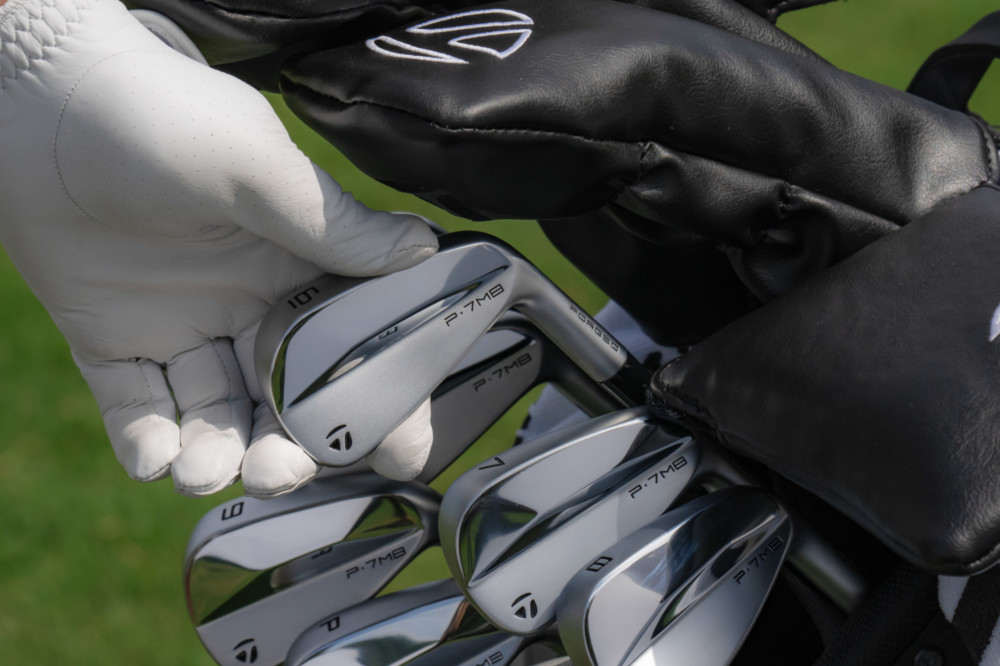 The new P·7MB was designed with insights from Rory McIlroy and Collin Morikawa - two of golf's elite ball strikers.

"The narrower sole width of P·7MB is a direct result of testing and feedback from Rory McIlroy, Collin Morikawa and our TaylorMade Tour pros. Rory and Collin worked with us to identify the right sole geometry and bounce to match what they were looking for, and we perfected that with P·7MB. Having two of the best players in the world being a driving force behind the design of this iron has us extremely excited to bring it to life."
Matt Bovee, Director, Irons Product Creation

In recent years, we've also seen a ton of Tour pros opt for P·7MC thanks to its precision playability, classic shaping and minimal offset – while perimeter weighting offers the right hint of forgiveness. This drool-inspiring design is also crafted using Compact Grain Forging and features machine milling on the face to create our most aggressive scoreline geometry. At its core, this iron is all about shot-making, control and confidence.

Defined by sophisticated craftsmanship, it has a satin finish and forged "Metal-T" in the cavity back that makes this set look as good in the bag as it does on the course. 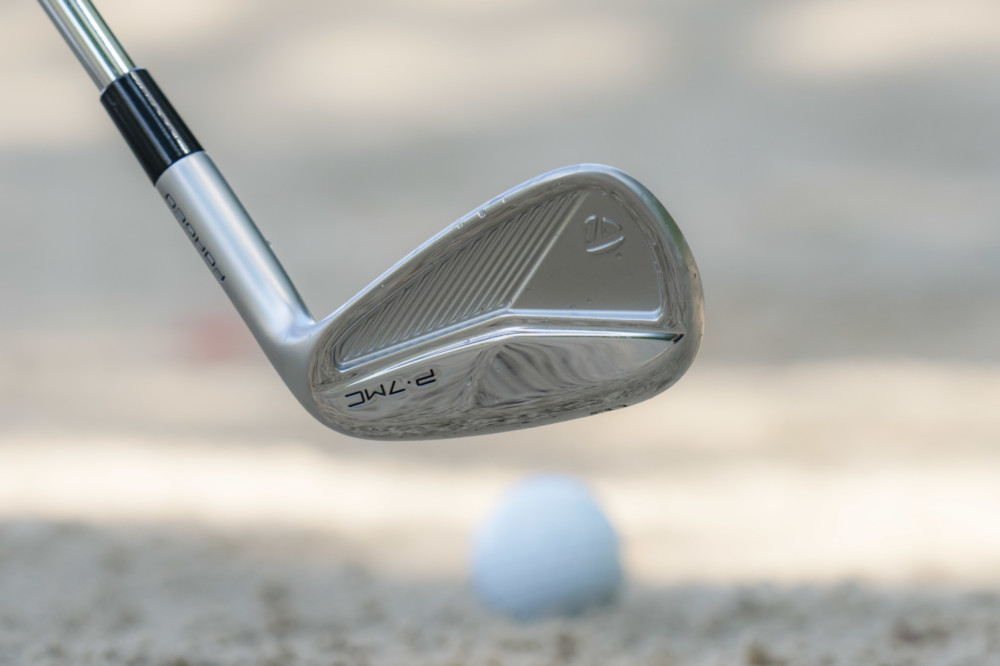 At its core, P·7MC is all about shot-making, control and confidence.

Both P·7MB and P·7MC are designed for golfers who want pure ball striking. You know, those maniacal perfection chasers who value feedback on every shot and want to know exactly where they hit it on the face. There's nothing more consistent than a solidly forged piece of steel. However, you'll benefit from an equally consistent swing to maximize the shot-making capabilities of these beauts. When you pure it, there's no better feeling. When you miss it, you pay the price. A price that some will say is well worth it.

Often described as the P·Series unicorn, P·770 blends the high-powered distance and forgives of P·790 with the control and playability of a muscle cavity or blade. Featuring forged hollow-body construction that makes the face more flexible, it is ideal for the player who has all the game but perhaps lacks a little distance.

Let's say you've been golfing most of your life. The swing and fundamentals are sound, but maybe you've got a couple kids now. Your dad bod's getting a little more prominent, and you're not hitting the course as often as you used to. Side Note: Details based on a true story (at TaylorMade, we pride ourselves on being relatable). If any part of that sounds like you, then the built-in forgiveness and boosted ball speed from P·770 might be the remedy you're looking for.

New for 2022-23, P·770 features an intuitive new technology called FLTD CG (pronounced "flighted CG"). The strategic design positions CG lowest in long irons and progressively shifts it higher throughout the set to the shorter, higher-lofted irons. It's meant to encourage easier launch and playability in those pesky long irons while helping you control trajectory and spin when you're firing at flags with scoring clubs. 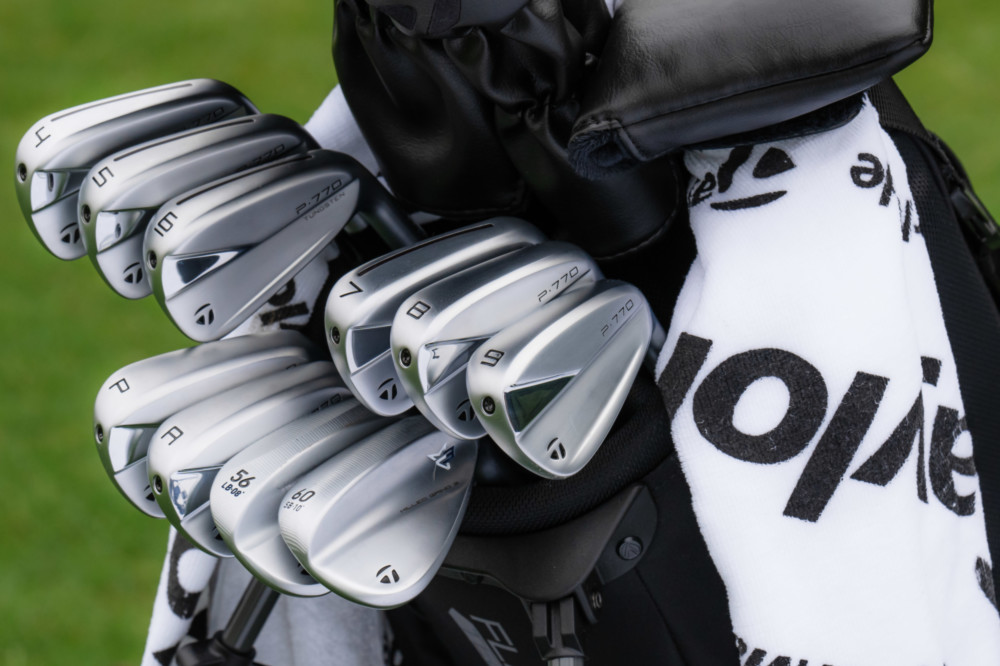 Essentially, an ascending CG through the set (starting at the 3-iron and progressively shifting upwards) gives you consistent performance and trajectory throughout the set. How'd we do it? By altering the tungsten weight scheme to precision place CG exactly where we want it and golfers need it.

Also new for P·770 is the addition of SpeedFoam™ Air™, first introduced in the 2021 P·790. The proprietary material dampens sound and strategically supports the face with a material 69 percent less dense than SpeedFoam, which was seen in the prior generation of P·770.

The general premise of P·770 is a lot of performance in a compact Tour-proven shape. It is built for the player who prefers to see a smaller profile but needs a little help in the distance department.

One of Tour's most common combo sets is a player electing to replace a 3-iron cavity back or blade with a forged-hollow construction, such as P·770 or P·790. This strategy can also pay off for better players at the amateur level – replacing both 3- and 4-irons can even be a good idea. The one callout: You need to have proper gapping.

When you jump from a P·7MC to a P·770, for example, there's a significant drop-off in spin (the P·770 will spin noticeably less). That means there's the chance for a low-spinning, low-trajectory ball flight that goes for miles. While that's great in some instances, it can create a significant distance gap between neighboring irons. Replacing long irons in a combo set may require adjusting lofts to create the proper spin rates and distance gaps.

Determining the correct loft is a process that needs to occur with a skilled custom club fitter in the appropriate setting with the right equipment, such as TrackMan or GC Quad. (NOTE: We do not recommend you attempt to bend and manipulate the loft of your irons on your own. It can damage the integrity of the iron and/or lead to undesired results. Please only allow trained technicians to alter your clubs or specify your custom lofts within your original order.)

Get Custom Fit If You Can

We always recommend going to a certified TaylorMade fitter to find the right clubs for your game and get them dialed into your swing. In fact, we just released a new SelectFit Kit that allows fitters to independently fit your irons for LOFT and LIE. We're currently the only major manufacturer with that capability. Click here to learn more or find a fitter nearest to you.

While there's no substitute for being custom fit, it's our hope that this article gives you the knowledge, confidence and insights to select the right P·Series Iron for your game.

What You Need to Know